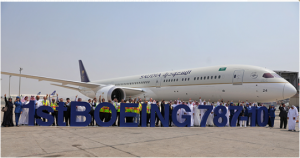 Saudi Arabian Airlines (SAUDIA), the national flag carrier of the Kingdom of Saudi Arabia, at a special ceremony at the new Terminal 1 of Jeddah’s King Abdulaziz International Airport, on September 30th, welcomed its first 787-10 Dreamliner, which will play a key role in the airline’s fleet and network expansion.

The layout of the SAUDIA Boeing 787-10 will be 357 seats in a two-class configuration, with 24 seats in Business Class and 333 seats in Guest Class (Economy).