Volotea grows by 36% in 2018 after carrying more than 6.5 million passengers 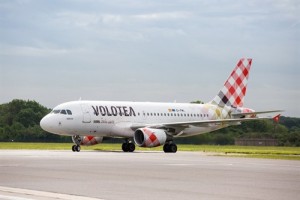 Volotea, the airline of mid and small‐sized European cities, has carried 6.57 million passengers in 2018, up 36% in comparison to 4.82 million in 2017. The airline will operate in 83 airports which will be connected with 319 routes, 41 of them new destinations.

Volotea operated a total of 53,400 flights in 2018 in comparison to 44,500 in 2017, becoming one of the fastest growing large LCC airlines in Europe. The airline has been growing year-on-year in passengers and operations. Volotea celebrated twenty million passengers in October 2018.

“After these first seven years of operations, we are very proud of Volotea’s development. Volotea links already more than eighty mid-sized cities in Europe, as Bordeaux, Nantes, Venice or Bilbao, that were clearly dependent on connections through hubs. The 6.5 million passengers carried last year, our 1,200 employees in 2019, and the solid and continued growth in operations and fleet  (evolving towards a complete Airbus 319 fleet) are the best evidence of our strong development” Carlos Muñoz, Founder and CEO of Volotea stated.

Volotea’s turnover grew by 29% year-on-year with revenues exceeding €396m in 2018, almost €90m higher than in the previous year.

In 2019, additional 41 new routes are launched and available for sale for Volotea to increase its network up to 319 routes connecting with direct flights 83 European mid and small-sized cities in 13 countries. Volotea is also ranked among the top airlines in the world opening more routes.

Volotea will continue increasing its operations this year, expecting more than 7.5m passengers. For these purposes, four new aircraft Airbus 319 are being received, increasing its fleet up to 34 units.

Additionally, Cagliari (Sardinia) have been announced to become the new Volotea base this year. Aircraft will start being based in this airport in May to boost operations with an enhanced tailor-made offer of additional seats and new destinations.

Among its headquarters and its twelve bases, more than 200 new positions will be open for recruitment for Volotea to capitalize in its continuous growth in operations in 2018.

Volotea, the airline of European mid and small-sized cities, has carried more than 20 millionth passengers since its first flight in 2012 and more than 6.5 million in 2018.

In 2019, Volotea is opening 41 new routes to serve a lineup of 319 routes, operating flights to more than 80 mid and small-sized European cities in 13 countries: France, Italy, Spain, Germany, Greece, Croatia, the Czech Republic, Portugal, Malta, Austria, Ireland, Luxembourg and Morocco. The airline expects to carry more than 7.5 million passengers in 2019.

Volotea has currently twelve bases: Venice, Nantes, Bordeaux, Palermo, Strasbourg, Asturias, Verona, Toulouse, Genoa, Bilbao, Marseille and Athens. These last three have been inaugurated in 2018. Volotea will inaugurate a new base in Cagliari in 2019.

Volotea has employed over 1,000 people in summer 2018 capitalizing in its activity growth. In 2019, 200 new positions will be created.

In 2019, Volotea operates its network with 34 aircraft, Boeing 717s and Airbus A319s. Both models are recognized for their comfort and reliability, with Volotea offering reclining seats which are 5% wider than the average in airlines.

The Airbus A319 is the aircraft model selected for its future growth and will allow the company to increase its passenger capacity by 25% to 156 seats and to serve longer routes.

The airline was selected by TripAdvisor Travellers’ Choice 2017 as the best airline based in France, Italy and Spain in the “Europe Regional and Low Cost” category. Volotea achieves a 90% recommendation rate among its clients.