Volotea announces a new Base in Athens 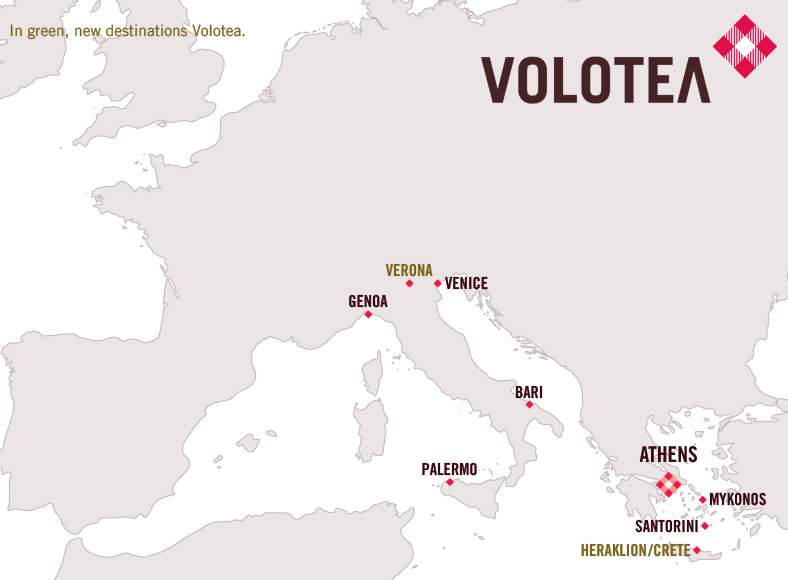 Volotea has announced today the launch of its twelfth base in Athens. The airline will base an aircraft in Athens airport. Volotea will start recruiting pilots and cabin crews at the beginning of next year creating approximately 30 direct new jobs in the capital.

Volotea will offer 320,000 seats, increasing its capacity by 160%. The airline will operate two new routes to Verona (starting on May 31st 2018) and Heraklion (starting on April 26th 29018). Both routes are already on sale at the airline website, www.volotea.com and through travel agents. Additional routes will be confirmed before the base is launched on April 26th.

That new flight adds up to the other six destinations that Volotea already serves in Athens, where it flies to four destinations in Italy (Venice, Bari, Genoa and Palermo) and to domestic routes such as Santorini and Mykonos.

“Today we are announcing Athens as a new base in our network. We are very pleased to be so warmly welcome and we will be proud to enhance our services in Athens creating jobs and hiring local staff”, comments Lázaro Ros, Volotea’s Director General and Co-founder. “This will boost our operations in Greece. We are really excited also to announce the new connections from Athens airport. The routes to Verona and Heraklion will allow our clients to discover these wonderful destinations, among the most charming ones in Italy and Greece.”

On behalf of Athens International Airport, CEO Yiannis Paraschis stated: “We are very pleased to welcome Volotea’s decision to launch a base in Athens International Airport, thus reinforcing very dynamically its presence in the Athens market. After 2 ½ years of consistent and successful operations in international and domestic routes to / from Athens, we are now welcoming Volotea to Athens airport as a home-based carrier. For this important step, a decision also complemented by the addition of two new destinations of significant potential, we would like to wish Volotea every success, and we remain committed to supporting the airline, as all our airline partners, in its future developmental plans.”

Volotea has celebrated its fifth anniversary on April 5th 2017. In September, Volotea has reached 14 millionth passengers carried since its first flight in 2012. Volotea expects to carry more than 4.7 million passengers this year.

Volotea operates more than 44,000 flights from nine bases in 2017: Venice, Nantes, Bordeaux, Palermo, Strasbourg, Asturias, Verona, Toulouse and Genoa, in which it leads on number of destinations (except in Toulouse). Volotea headcount is 875 employees this year after adding 150 new positions to capitalize its growth in activity.

In 2018, Volotea will open 58 new routes to serve a lineup of 293 routes, operating flights to 78 mid and small-sized European cities in 13 countries: France, Italy, Spain, Germany, Greece, Croatia, the Czech Republic, Albania, Portugal, Malta, Austria, Ireland and Luxembourg. For 2018, new bases in Bilbao and Marseille have just been announced. Volotea will also create another 250 jobs next year.

Volotea will operate its network with 32 aircraft next year, between Boeing 717s and Airbus A319s. Both models are recognized for their comfort and reliability, with Volotea offering reclining seats which are 5% wider than the average in airlines.

The Airbus A319 is the aircraft model selected for its future growth and will allow the company to increase its passenger capacity by 20% to 150 seats and to serve longer routes.

The airline has been selected by TripAdvisor Travellers’ Choice 2017 as the best airline based in France, Italy and Spain in the “Europe Regional and Low Cost” category.